NEW DELHI: Even as his meeting with 26/11 attack mastermind Hafiz Saeed created a furore in Parliament and outside, journalist and Baba Ramdev associate Ved Prakash Vaidik said he had consented to meet the Jamaat-ud-Dawa boss purely at the behest of a journalist friend from Pakistan.

"When I was in Pakistan, the media criticism of Hafiz Saeed in India came up for discussion. It was then that a Pakistani journalist asked me if I would like to meet Saeed in person. I agreed and a call was immediately made to fix the meeting," he told TOI, denying any other motive to his appointment with the most-wanted terrorist.

Refuting allegations that he had met Saeed as an envoy of the Narendra Modi government, Vaidik told TOI that his interface with the Jamaat-ud-Dawa boss was driven only by journalistic considerations. "I would like to tell Congress, which is alleging that I met him on behalf of the government, to attack the Modi regime directly rather than train its guns from my shoulders".

"I am a known name in Pakistan. My writings and articles are translated and reproduced in Pakistani media. In my 55 years of journalistic career, I have not declined to meet anyone. I have met Maoist leaders and LTTE leaders including Prabhakaran," said Vaidik. "I wanted to analyse Saeed's mind and know why he committed heinous crimes against India," he added.

He denied being part of the Vivekananda International Foundation, with which IB chief Ajit Kumar Doval was earlier associated. This has been alleged as the reason why he was chosen to play the government's 'envoy' to reach Saeed. "I have never been associated with the government and do not look at such association in the future. I am an independent journalist who is free to meet anyone," he told TOI. 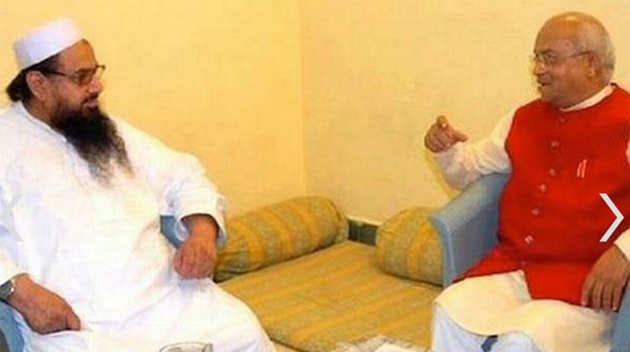 "I have met enemies of the country in the past ... my experience says resolution of conflict is possible not through the gun but talks," he said.

However, asked if he was advocating talks with Saeed, Vaidik said, "I am neither the prime minister not the government's representative.... It is for the government, Army chief, police and the courts to discharge their responsibilities in this regard," he underlined.
The issue led to two adjournments in the Rajya Sabha. Though the government said it had nothing to do with the meeting and that there was no 'Track-2 or Track-3' diplomacy involved, opposition members led by Congress sought to link Vaidik's controversial enterprise with the BJP and highlighted Ramdev's support for Modi's prime ministerial bid.
READ ALSO: Congress alleges Vaidik-Saeed meeting at govt's behest
There was uproar in Lok Sabha too with members seeking response over the "purpose and motive" behind the meeting from the home minister or external affairs minister.
Leader of the upper House and finance minister Arun Jaitley said for India, Saeed was a terrorist and indeed involved in terrorism against India. Government had nothing to do with "directly, indirectly or even remotely" with any journalist meeting Saeed.
As the controversy refused to die down, minister of state for parliamentary affairs and environment Prakash Javadekar said, "I want to clarify that we don't approve any such activity (meeting with Saeed)".
Even as Vaidik termed his meeting with Saeed as a journalistic call, the latter tweeted: "Row in Indian Parliament over a journalist's meeting with us shows the extremism, narrow-mindedness of their (Indian) politicians...utterly shameful".
"We meet everyone with an open heart, whoever wants to meet; regardless of nation, belief or religion...Sadly, so-called 'secular' India is unable to bear an informal meeting of her journalist, Mr Vaidik, another eg (example) of Indian narrow-mindedness," Saeed tweeted through his official Twitter handle.

Giving a peek into what transpired during the interview, Saeed said, "We discussed how all 26/11 evidences provided by India have been rejected and (I) asked Mr Vaidik why India does not respect Pakistani courts. Vaidik asked if we would protest Modi's visit to Pakistan, on which I replied, 'We don't participate in such politics and protests'." 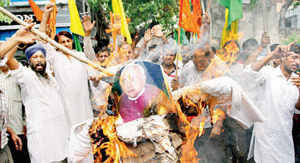 
Rahul says Vaidik is RSS man but Sangh denies links with man who 'moves around with Khurshid'.

Rahul Gandhi on Tuesday called journalist Ved Pratap Vaidik an "RSS man", and the RSS hit back saying "anyone who roams around with Mani Shankar Aiyer and Salman Khurshid" cannot be associated with the Sangh.

Parliament was rocked for the second consecutive day yesterday over a meeting between freelance journalist Vaidik and 26/11 Mumbai attack mastermind Hafiz Saeed of the Jamaat-ud-Dawah in Lahore on July 2, with the Congress pressing for the government's response. The Modi government has already washed its hands off the matter, saying it cannot be held responsible for the "diplomatic misadventure of a private individual", but both the Lok Sabha and the Rajya Sabha saw disruptions as soon as the two Houses met for the day on Tuesday. Both Houses were disrupted during the Question Hour, and again during the Zero Hour with Congress and other opposition members storming the Well. In the Lok Sabha, External Affairs Minister Sushma Swaraj said the government has nothing to do with the journalist meeting India's one of the most-wanted terrorists in Pakistan. "Allegations that the government facilitated the journalist's meeting with Hafiz Saeed are false and baseless. Neither did he, while going to Pakistan, nor after going there, informed us that he was meeting Hafiz Saeed. This is purely a private visit and a personal meeting," she said. In the Rajya Sabha, the leader of the House, Finance Minister Arun Jaitley said, "This is a diplomatic misadventure of a private individual. The Indian State has nothing to do with it... The person or his views have nothing to do with either the government or my party."

His statement led to uproar, with sloganshouting Congress members storming the Well. As soon as Lok Sabha met for the day, the Congress members, led by Mallikarjun Kharge, were on their feet demanding a reply from the government on the meeting of the journalist with Saeed. When the Speaker declared that Question Hour will not be suspended, Congress members trooped into the Well shouting slogans such as "Vaidik ko mat bachao", "Home Minister jawab do", and "Hafiz ka sach batao". In the Rajya Sabha, the leader of the opposition, Ghulam Nabi Azad said someone in this government must have facilitated the meeting. Azad said that Vaidik told a Pakistani TV channel that had he been the prime minister, he would have allowed Saeed's entry into Kashmir without visa, that he was for Kashmir's 'aazadi' and that the Pakistan-occupied Kashmir and 'Indian Kashmir' should unite to form a separate entity. Vaidik had met Saeed in while visiting Pakistan with a group of journalists and politicians invited by a peace research institute.

Rahul attacks govt While calling Vaidik an "RSS man", Congress vice-president Rahul Gandhi questioned whether the Indian High Commission in Islamabad had facilitated his meeting with Saeed. "The question is, did the Indian embassy facilitate the gentleman or not? We are curious to find out if the Indian embassy has facilitated this event... whether they helped this gentleman in any way. That's what we are curious about," Rahul told reporters. Vaidik has already denied links with the RSS, while Ram Madhav, the RSS leader who recently joined the BJP, said, "The person who roams around with Mani Shankar Aiyer and Salman Khurshid is not from RSS." MMB