A woman walks past a large screen showing television coverage of India's prime minister Narendra Modi, during the Indian general election, in the lobby of the Bombay Stock Exchange (BSE) in Mumbai, on Friday, May 16, 2014. India’s S&P BSE Sensex index has surged 21 percent this year on optimism Modi’s pledges to cut red tape and attract investment will boost Asia’s third-largest economy after growth slowed to near a decade low. Photographer: Vivek Prakash/Bloomberg

Financial professionals are now more bullish on India relative to the largest emerging markets than at any point in the past five years after Narendra Modi scored the biggest election victory in three decades, giving him a mandate to revive economic growth as prime minister.

Twenty-three percent of respondents in the Bloomberg Global Poll said India offers one of the best investment opportunities among eight of the biggest markets worldwide, versus the 12 percent average for the other so-called BRIC nations, or Brazil, Russia and China. (SHCOMP) That gap is the widest since the survey began in 2009. Fifty-one percent are optimistic on Modi’s policies while those in favor of Brazil President Dilma Rousseff’s sank to a record 11 percent.
VIDEO: BRICS Create $50B Bank With Something for Everyone
“The mandate that Modi has really gives you optimism that India will finally make their political process more efficient and be able to tackle their infrastructure issues to unlock the country’s potential,” said Andrew Douglas, who oversees about $2 billion as the chief investment officer of the wealth management group at Dubuque, Iowa-based Heartland Financial USA Inc. and participated in the poll. “Brazil seems to be doing everything wrong.”

India’s S&P BSE Sensex (SENSEX) index has surged 21 percent this year on optimism Modi’s pledges to cut red tape and attract investment will boost Asia’s third-largest economy after growth slowed to near a decade low. Exchange-traded funds that invest in the country lured more inflows than any other emerging market this year, while investors pulled money from Brazil as the economy sunk into stagflation under Rousseff’s watch.
The MSCI Emerging Markets Index has gained 6 percent this year, fueled by signs of a recovery in the Chinese economy and as concern eased that rising borrowing costs in the U.S. will spur capital outflows. Forty-eight percent of respondents in the Bloomberg poll said the developing-nation stock index will climb in the next six months, versus 27 percent who said it will fall. The poll of 562 Bloomberg users was conducted July 15 and 16 by Selzer & Co., a Des Moines, Iowa-based firm, and has a margin of error of plus or minus 4.1 percentage points.
VIDEO: India's Modi Promises `Bitter Medicine' in Budget

Forty percent of respondents saw the worst opportunities in Russia. The Micex stock index and the ruble tumbled yesterday on new U.S. sanctions designed to punish President Vladimir Putin for failing to end support for rebels in Ukraine. American depositary receipts traded overseas and the biggest U.S.-listed ETF(RSX:US) that holds Russian shares extended the selloff after a Malaysian passenger jet crashed in eastern Ukraine, killing all on board.
In India, the May 16 election victory for Modi, 63, has investors anticipating he will replicate at the national level the success he had as government of Gujarat state, where he oversaw annual economic growth of 10 percent since 2001. Under former Prime Minister Manmohan Singh’s Congress party, the growth rate fell to a decade-low of 4.5 percent in the year ended March 2013.
VIDEO: Modi Retains India Deficit Target

Growing optimism toward India is already making stocks more expensive. The Sensex is valued at 15.6 times estimated profit for the next 12 months, within about 3 percent of the highest level since January 2011, according to data compiled by Bloomberg.
The last time respondents in the Bloomberg poll were this optimistic on India, the nation’s stock market dropped 17 percent over the following year.
There are few signs so far, though, of a slowdown in foreign inflows. U.S-listed ETFs that invest in India attracted more than $1 billion this year, while exchange data show foreigners added a net $11.3 billion to holdings of locally-listed shares, the most among eight Asian markets tracked by Bloomberg.

VIDEO: Modi to Outline Plans to Boost India’s Economy
India’s poll ranking for the best opportunities has climbed faster than any other major market, now tied with the European Union for second behind the U.S., from sixth in September.
“Foreign funds continue to remain bullish and positive on Indian markets, which is adding to confidence,” Arindam Ghosh, the chief executive officer at Black Ridge Capital Advisors in Mumbai, said in an interview with Bloomberg TV India. “The Indian market trend is going to be up.”
To contact the reporter on this story: Boris Korby in New York at bkorby1@bloomberg.net

Need a Bank of Their Own
To contact the editors responsible for this story: David Papadopoulos at papadopoulos@bloomberg.net Michael Patterson 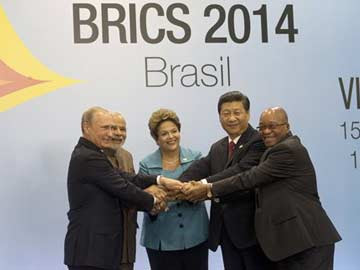 Leaders of the BRICS nations,

pose for a group photo during

nations launched a $100 billion development bank and a currency

reserve pool on Tuesday in their first concrete step toward

The bank, aimed at funding infrastructure projects in developing

nations, will be based in Shanghai, China, and India will preside

over its operations for the first six years, followed by five-year

terms for Brazil and then Russia, leaders of the five-country group

announced at the 6th BRICS -  Brazil, Russia, India, China and

The member countries will also set up a $100 billion currency

For India, it was a moment of success after hard bargaining to

where the bank would be located and the share-holding in it. The

bank will be called the New Development Bank, a name suggested

by Prime Minster Narendra Modi.  (The Biggest Challenge for

BRICS Success? Big Brother China)Also, the bank will begin with a subscribed capital of $50 billion

divided equally between its five founders; China, the world's

number 2 economy, had argued that the economic strength of a

member nation should be the criteria for contribution to the bank -

in intense negotiations that delayed the bank for two years, India

lender than the others. (Read: Foreign Media on BRICS New

Development Bank)"The agreement towards setting up the BRICS New Development

Bank is a significant step. I am happy the initiative announced in

2012 in Delhi has become a reality," PM Modi said. The summit is

Mr Modi's first multilateral engagement since he took over as

Minister in May this year.  (BRICS: PM Pitches for 'Zero

the global financial order created by Western powers after World

War Two and centered on the International Monetary Fund and

exodus of capital from emerging markets last year, triggered by the

scaling back of US monetary stimulus. The new bank reflects the

growing influence of the BRICS, which account for almost half the