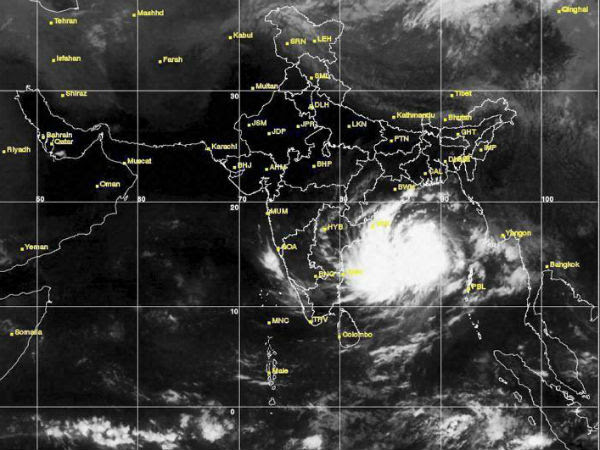 Keeping in mind the safety of passengers, East Coast Railway has decided to cancel the services of 38 trains on October 12 when cyclone 'Hudhud' is expected to hitOdisha and Andhra Pradesh. "We do not want even a single casualty as our passengers safety is foremost in our agenda.

"Hence, we have decided to cancel 38 the trains on the Bhubaneswar-Visakhapatnam route from 6 AM on October 12 and during that time the entire section would be closed to all mail express and passenger trains," ECoR CPRO J P Mishra said. According to the Met department, Cyclone Hudhud, which is transform into a "very severe cyclonic storm", is expected to hit Andhra Pradesh-Odisha coast on October 12. The cancelled passenger trains include
Bhubaneswar-Bangalore Prashanti Express,
Bhubaneswar-Visakhpatnam Intercity, Bhubaneswar-Yesvantpur, Bhubaneswar-Secunderabad Visakha Express, Puri-Okha Express, Bhubaneswar-Tirupaty Express, Puri-Tirupaty Express, Bhubaneswar-Mumbai Konark Express, Puri-Chennai Express etc. Some of the trains originating from Howrah and bound for the southern states would be diverted via Raipur and Nagpur section.

Suggesting complete evacuation from coastal areas of north Andhra Pradesh and south Odisha, it said sea condition will be "rough" to "very rough" from Saturday morning and would reach dangerous level on Sunday morning.
The Indian Meteorological Department (IMD) said the storm surge of about 1-2 metres above astronomical tide would inundate low lying areas of Visakhapatnam, Vijayanagaram and Srikakulam districts of north coastal Andhra Pradesh at the time of landfall. 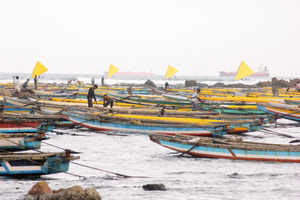 Boats return to the harbour in Visakhapatnam after the cyclone warning on Friday. (TOI Photo)