Cyclone Hudhud? Really? What does that mean?

How can a cyclonic storm that could make landfall at India’s eastern coastline with winds blowing in the range of 120 to 140 km per hour be named Hudhud?

A Google search of Hudhud throws up this definition of the Omani word: ‘Hoopoe, the bird which carried the letter from Nabi Sulayman alayhissalam to Bilqis, the Queen of Saba (Sheba)'.
The India Meteorological Department, which is a regional specialised meteorological centre recognised by the World Meteorological Organisation, has the mandate to provide weather advisories to seven countries -- Bangladesh, the Maldives, Myanmar, Oman, Pakistan, Thailand and Sri Lanka besides India.
It also asks these countries to suggest names for the cyclones, which are then listed in an alphabetical order of the names of the member countries.

This time, it was the turn of the Omanis who picked Hudhud to identify the northern Indian Ocean cyclone.
The main north Indian Ocean tropical season runs from May to November.
The convention of naming cyclones dates back to the early 20th century when an Australian forecaster named major storms after politicians he disliked.
While the US weather office started giving names to cyclones in 1953, the trend began in the sub-continent in 2004.
Whatever be the logic behind giving the cyclone such a name, it certainly makes lighter vein of its severity.
The next cyclone in the northern Indian Ocean region will be named Nilofar by Pakistan followed by Priya (Sri Lanka) and Komen (Thailand).

In the evening, Hudhud was 675km east-southeast of Visakhapatnam and 685km southeast of Gopalpur, moving closer to the coast.
"The system would continue to move west-northwestwards and intensify further into a very severe cyclonic storm during the next 12 hours. It would cross north Andhra Pradesh coast around Visakhapatnam by the forenoon of 12th (Oct)," the Indian Meteorological Department (IMD) said in a bulletin.

The cyclone had been on Wednesday positioned at about 1100km southeast of Gopalpur and 1150km east-southeast of Visakhapatnam at around 11.30am.
The Andaman &amp; Nicobar Islands were, meanwhile, put off a state of alert as "no adverse weather" is expected due to this system over the territory.

The Met office has issued a heavy rainfall warning for the north Andhra Pradesh coast and south Odisha.
"Under the influence of the system, rainfall at most places, with heavy (6.5 - 12.4cm) to very heavy falls (12.5 - 24.4cm) at a few places, and isolated extremely heavy falls (more than 24.5cm), would occur over south Odisha from the evening of Oct 11 onwards.

"Rainfall would occur at most places with heavy to very heavy rainfall at a few places (likely) over Visakhapatnam, Vizianagaram and Srikakulam districts of north coastal Andhra," the bulletin said.
According to the Met department, squally winds reaching speeds of 50-60 kmph gusting to 70 kmph would commence along and off the north Andhra Pradesh and south Odisha coasts from the morning of Oct 11. Windspeeds would increase to 130-140 kmph gusting to 150 kmph from Oct 12.

"Sea condition would be rough to very rough from the morning of Oct 11. It would gradually become phenomenal from 12th morning onwards," the Met department said.
It also warned that, under the influence of the system, there was a threat of "extensive damage to kutcha houses, partial disruption of power and communication lines, minor disruption of rail and road traffic".
The bulletin also cautioned against "flying debris and the flooding of escape routes". 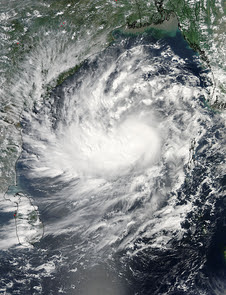 NASA's Aqua satellite flew over Tropical Cyclone Hudhud on Oct. 9 and took a picture of the storm that showed it was still somewhat elongated, but more organized than the previous day. Another NASA satellite provided the hint of a developing eye. Warnings for winds, rain and surf are already in effect for the northern Andhra Pradesh coast and south Odisha coastline of eastern India as Hudhud approaches.


Tropical Cyclone Hudhud formed on Oct. 8 and began moving from east to west across the Bay of Bengal, Northern Indian Ocean.
On Oct. 9 at 07:45 UTC (3:45 a.m. EDT), the MODIS (Moderate Resolution Imaging Spectroradiometer) instrument aboard NASA's Aqua satellite captured an image of Tropical Cyclone Hudhud in the Bay of Bengal. Although the image showed that Hudhud looked somewhat elongated from east to west, the cyclone has been consolidating and getting more organized over the previous 24 hours. The Joint Typhoon Warning Center (JTWC) stated that animated multispectral satellite imagery taken early on Oct. 9 showed improving organization of the system, with well-defined curved banding of thunderstorms now beginning to tightly wrap into a consolidating low-level circulation center.
NASA's Global Precipitation Measurement (GPM) mission satellite provided a microwave look at Hudhud and saw a ragged microwave eye at 05:56 UTC (1:56 a.m. EDT) on Oct. 9, indicating the storm was getting stronger and more organized.
At 0900 UTC (5 a.m. EDT), Hudhud's maximum sustained winds were near 60 knots (69 moh/111 kph). Hudhud's center was located near 13.9 longitude and 88.4 east latitude, about 534 nautical miles (614 miles/989 km) south of Kolkata, India. Hudhud is moving to the west-northwestward at 6 knots (6.9 mph/11.1 kph). Hudhud is expected to reach typhoon strength before making landfall in east central India.
JTWC forecasters note that analysis of the upper-level of the atmosphere (troposphere) indicates the system is located in a generally favorable environment. Hudhud is moving along the southern edge of a subtropical ridge (elongated area) of high pressure anchored to the north. The cyclone is expected to remain on a general west-northwestward trajectory.
According to the Regional Specialized Meteorological Centre for Tropical Cyclones over the North Indian Ocean or RSMC, Hudhud is forecast to cross North Andhrapradesh coast around Visakhapatnam during the afternoon of Oct. 12.
On Oct. 9, the RSMC issued the following warning for north Andhra Pradesh coast and south Odish as Hudhud nears for landfall:  A Heavy Rainfall Warning is in effect. Under the influence of the system, rainfall at most places with heavy (6.5 to 12.4 cm/2.5 to 4.8 inches) to very heavy falls (12.5 to 24.4 cm/4.9 to 9.6 inches) and isolated totals greater than 24.5 cm over extremely east Godavari, Visakhapatnam, Vijayanagaram and Srikakulam districts of north coastal Andhra Pradesh and south Odisha from the evening of Oct. 11 (local time) onwards. Rainfall would occur at most places with heavy to very heavy rainfall at isolated places over remaining districts of Andhra Pradesh and north coastal Odisha during the same period.
In addition to the Heavy Rainfall Warning, Storm Surge Warning and High Wind Warning. The RSMC noted: Squally wind speed reaching 50 to 60 kph gusting to 70 kph would affect the area along and off the northern Andhra Pradesh coast and southern Odisha coast from the morning (local time) hours on Oct. 11 and onwards. RSMC expects winds to increase to 130 to 140 kph (80 to 87 mph) with higher gusts from the morning of Oct. 12 (local time) along and off north Andhra coast and 80 to 90 kph (49.7 to 56 mph) along and off south Odisha coast. Storm surge of about 1 to 2 meters (3.2 to 6.4 feet) above astronomical tide would inundate low lying areas of east Godavari, Visakhapatnam, Vijayanagaram and Srikakulam districts of north coastal Andhra Pradesh at the time of landfall.
For updated warnings and watches, visit the RSMC website: http://www.rsmcnewdelhi.imd.gov.in/images/bulletin/indian.pdf
Rob Gutro
NASA's Goddard Space Flight Center

Oct. 08, 2014 - NASA Sees Newborn Tropical Storm Hudhud in Northern Indian Ocean
The Northern Indian Ocean has awakened after a tropical slumber and created Tropical Storm Hudhud on Oct. 8 and NASA's Aqua satellite passed overhead.
The Atmospheric Infrared Sounder or AIRS instrument that flies aboard  NASA's Aqua satellite passed over Tropical Cyclone Hudhud on Oct. 8 at 6:53 UTC (2:53 a.m. EDT and captured infrared data on the storm revealing bands of strong thunderstorms around the center.
Animated infrared satellite imagery showed that the low-level circulation center was consolidating, and there is an improvement in the banding of thunderstorms wrapping into a defined center. Another image showed tightly-curved banding of thunderstorms and an eye in microwave data.
On Oct. 8 at 1500 UTC (11 a.m. EDT), Hudhud had maximum sustained winds near 45 knots (51.7 mph/83.3 kph). It was centered near 13.2 north and 90.4 east. It was centered about 562 nautical miles (646.7 miles/1,041 kph) south of Chittagong, India. Hudhud was moving to the west-northwest at 9 knots (10.3 mph/16.6 kph). 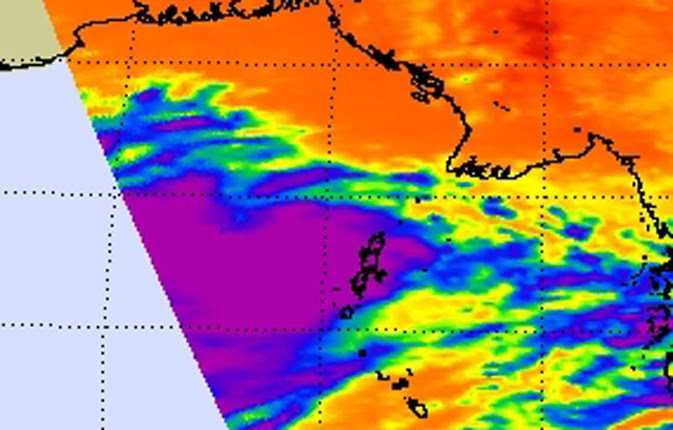 - cyclone hud hud is a tropical cyclone of the october 2014 in north indian ocean cyclone season.