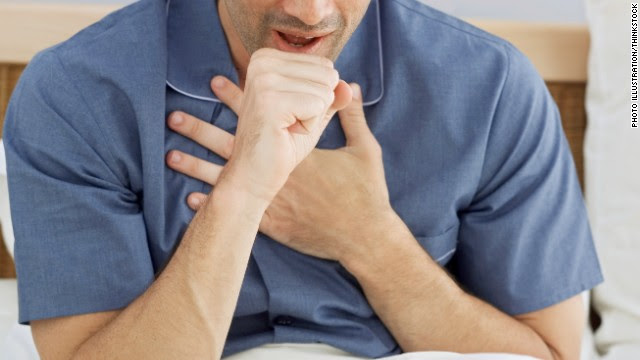 The popular name for the disease comes from the whooping

sound an infected person makes after a coughing fit.

California is being hit hard with a whooping cough epidemic, according to the state's public health department, with 800 cases reported in the past two weeks alone.

The agency says that there were 3,458 whooping cough cases reported between January 1 and June 10, well ahead of the number of cases reported for all of 2013.

This is a problem of "epidemic proportions," the department said. And the number of actual cases may be even higher, because past studies have shown that for every case of whooping cough that is reported, there are 10 more that are not officially counted.

Whooping cough, known to doctors as pertussis, is a highly contagious respiratory infection that is caused by a bacterium known as Bordetella pertussis.

The popular name for the disease comes from the whooping sound an infected person makes when gasping for breath after a coughing fit.

The bacteria spreads through coughing and sneezing. One person can infect up to 15 people nearby, according to the Centers for Disease Control and Prevention. Typically symptoms appear anaverage of seven to 10 days after exposure.

Infants and young children are more vulnerable to the disease than other age groups. It can be particularly dangerous for babies. About half of the infants who get whooping cough end up in a hospital. Some cases are fatal.

That's why the public health department in California is strongly urging people to make sure their vaccinations are up to date, especially if they're pregnant. State health officials are working closely with schools and local health departments to spread the word.

"Unlike some other vaccine-preventable diseases like measles, neither vaccination nor illness from pertussis offers lifetime immunity," Dr. Ron Chapman, director of the California Department of Public Health, said in a statement. "However, vaccination is still the best defense against the potentially fatal diseases."

All adults should get a Tdap booster, unless you had one as a teenager (after age 11).

Nationally, more than 90% of children get the first three doses of the vaccine, but far fewer get the booster.

California has historically had higher vaccination rates than other states, but a recent study found large clusters of parents who did not vaccinate their children close to areas with a large number of whooping cough cases during the 2010 California outbreak.

The current outbreak is too new for scientists to know if there is a similar pattern.

Whooping cough cases have spread rapidly in the United States this year, with a 24% increase nationally in the number of cases, compared to January through April of last year, according to the CDC.

Other states are reporting similar problems. The Mobile County Health Department in Alabama, for example, recently noted an "alarming" rise of cases locally, with 18 cases in May and June. That's more than all the reported cases in Mobile for 2013, health officials say.

If you do catch whooping cough, you will typically be treated with antibiotics. Doctors often also treat all the family members in an infected person's house to prevent transmission.
प्रस्तुतकर्ता virendra sharma पर 8:41 pm