Bariatric surgery or stomach-stapling is a complex procedure that's being peddled as a cure for Type 2 diabetes. Clients and surgeons help sift fact from fiction. 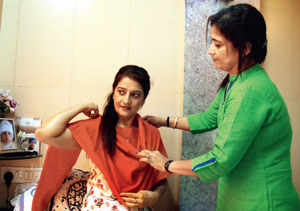 That they can now experiment with their wardrobe is only one upside of bariatric surgery, say sisters Sarla Thakker (left) and Rasila. All three Thakker sisters have undergone the procedure; their brother will go under the knife in JunePic Rana Chakraborty

Bariatric surgery or stomach-stapling is a complex procedure that's being peddled as a cure for Type 2 diabetes. Clients and surgeons help sift fact from fiction.

At 15, you don't expect to be hypertensive, or worse, pre-diabetic. But even at 114 kg, 15-year-old Laksh Motwani wasn't perturbed. What did torment him were jibes from friends at Laxmibai English Medium School in Mulund, when he'd huff up a flight of stairs. Which is why, when his mother, Jaya narrated the 'miraculous' transformation of an inmate at the oldage home she worked for, Laksh was convinced he needed bariatric or weightloss surgery too. Bariatric surgery is an umbrella term for a host of procedures. Laparoscopic Sleeve Gastrectomy involves removing 2/3rd of the stomach using 'staples'. It reduces the amount of food consumed due to an 80% fall in ghrelin, a hunger-inducing hormone. Gastric Bypass helps create a tiny tummy pouch, restricting food intake. Laproscopic Adjustable Gastric Binding, a popular choice with Indian surgeons, involves using a silicon band to divide the stomach into a tinier upper pouch, and a larger lower one. The band is tightened regularly.

Two years later, and half his previous size (he is now 64 kg), Laksh is a 'model', says his doctor and head of bariatric surgery at Jaslok Hospital, Dr Manish Motwani. He visits Motwani's Aastha Health Care Clinic every day, "to inspire others with his story." Not all stories have a happilyever-after, though. Last fortnight, Mumbai banker Gopal Agarwal moved the Maharashtra Medical Council against three leading doctors at Nova Surgery Specialty in Tardeo. His 56-year-old father, Puranchand, died last year following lung complications four months after what Gopal claims was a botched bariatric procedure. Ironically, he was the one to have had convinced the Udaipur businessman, then 116 kg-heavy, to consider surgery.

Not a diabetes ninja That studies - including a recent one by Monash University - claim that treatment for Type 2 diabetes (T2D) in overweight people by substantial weight loss is safe and hugely beneficial, has made it easy to peddle a complicated 'life-saving' procedure as everyday. Motwani says his patients have doubled in the last three years. He now handles 22 cases a month. If researchers from the Council for Scientific and Industrial Research-Institute of Genomics and Integrative Biology (CSIRIGIB), Delhi, are to be believed, our genetic makeup coupled with excess food consumption and lack of activity make Indians sitting ducks for T2D. This means the market for surgical remission of T2D is huge. Padmashri professor Dr Shashank Joshi, Fellow of the American College of Endocrinology, cautions against hastening to the OT, especially if the patient expects to be cured of T2D, a condition marked by high glucose levels in the blood caused by relative deficiency of insulin. "While, for morbid obesity, bariatric surgery is the treatment of choice," he says, highlighting greater risk at any extremes of age, it's definitely not a cure for diabetes. "We lack robust, long-term data that establishes it as a cure. The surgery may control the condition temporarily," says the president of Indian Academy of Diabetes. He suggests it for difficult-totreat cases of carefully selected morbidly-obese patients (with BMI over 40) by experienced hands. "Post surgery, patients could experience hypoglycaemia or low blood sugar attacks. The pancreas may start producing too much insulin, or experience dumping syndrome. The stomach rapidly dumps its contents in the small intestine, causing a variety of unpleasant effects," he explains. Some patients suffer from nutritional deficiencies because a part of the gut has been cut. Confusing claims

Dr Archana Juneja, endocrinologist at Kokilaben Dhirubhai Ambani Hospital, disagrees, stressing that experiments are on but only to determine if bariatric surgery can be effective on lean diabetics. "In November, we operated on a single woman of 28, a diabetic on insulin and tablets. Now, she is 20 kg lighter, and is off insulin and medication," she says, adding, "Almost 80% of our patients have gone off insulin, and 70% are off meds too." She is quick to clarify though, that the procedure doesn't cure diabetes, but makes it enter a state of remission. This is a drug-free interval, and if the patient is careful with his lifestyle he may be able to maintain sugar levels without medication for up to seven years. Fun for the family? The Thakker siblings might well be aware that their diabetes could return in a couple of years. But for now, the life-changing alteration in their appearance is the talk of their neighbourhood. After three sisters, all operated on by Motwani, it's now the turn of their brother in June. The eldest, Sarla Thakker, then 48, a Mulund-based beautician, was the first to seek bariatric surgery two years ago. "Obesity grade 2, 95 kg, BMI 35..." Motwani reads from her file. "Their father passed away at 50 due to cardiac arrest, and their mother's heart is enlarged." This plus high blood pressure, borderline diabetes and severe knee pain made Sarla a genuine candidate. "Sarla was spending Rs 6,000 a month on weight-loss drugs. Other than severe acidity, she was also frustrated by limited wardrobe options," he says. After three counselling sessions, she was considered a candidate for Laproscopic Sleeve Gastrectomy. "She dropped 40 kg within six months, came down to 55 kg (ideal for her 5'2" height), and has kept it down with no side-effects."

Her sister, Rasila Thakker went under the knife six months later, followed by their third sister, who now resides in Pune. "Rasila weighed 95 kg, was a diabetic with hypothyroidism and a ligament tear in the knee. She could not walk," Motwani recalls. "No doctor was game for a ligament surgery because it would fail due to her weight." The Kandivali resident had undergone 14 surgeries for everything from fibroids and piles to angiographies and fractures, all related to excess weight. Now 51, and recovering from her knee surgery when we speak, Rasila smiles when declaring, "I'm now 52 kg." Right after surgery, she says, "There was no pain, but the appetite was so sharply reduced, it was a bit difficult at first. Now I can eat paneer, cheese, pista, everything!" Answer for the overweight For the morbidly obese, bariatric procedures have become more than a short-term solution. Dr Mufazzal Lakdawala, one of Mumbai's top laparascopic surgeons, performs close to 50 bariatric procedures a month, up from 15 in 2008. But, he suggests it only to those who cross the 37.5 BMI marker. In the absence of an Indian regulatory board, he bases the BMI indicator for morbid-obesity on international guidelines. "Research shows that 99% of the morbidly obese will fail diet-exercise regimes, and the only drug available to treat obesity, Orlistat, has undesirable side-effects including hypertension, a condition that already plagues the obese."

Shrugging off the 'risk' factor, he says complications arising from these surgeries is at 0.1% (1 patient in 1,000 experiences complications), "and if the complication is in fact, a result of the surgery, it will manifest well within a month's time." For some, it could mean a new life. With infertility linked to obesity, and drugs to treat infertility causing weight gain, patients are caught in a vicious web. "Studies link obesity to greater risk of breast and uterine cancer among women, and prostate and lung cancer among men. Then there is a toll on the bones, not to mention cardiac arrest risk and substantial psychosocial stress. So, for some, the benefits far outweigh the dangers," he argues. A World Health Organisation report says the obese in India make up 12% of the total population (12.4% in Mumbai). These are the potential clientele, including foreigners who pay six times less in India than they would in their own countries. Dr Anand Mishra, manager at Andheri's Forever Young Cosmetic Clinic admits to the growing demand. "Most of our clients are here for cosmetic reasons. The next most-cited reason is diabetes or blood pressure." While cosmetically-conscious clients may love Lakdawala's latest technique that involves a single incision in the belly button and lets patients return to work in three days, pre and post surgery follow-ups are insisted on, preferably with the patient's family in tow.

Although post-surgery complications can include intra-operative bleeding or bleeding after surgery, and some hair loss, counselling and follow-ups help weed out trouble. While Mishra says they are in touch with their patients 20 days prior to the operation and 30 days after surgery, Lakdawala sees his patients four times in the first year, and then annually. "It's important that they take vitamins. We are shutting down their ability to eat, which makes vitamins a must to supplement nutritional loss. We must also be certain that they stick to the prescribed diet and exercise routine," he says. The team that sets goals before surgery includes a psychiatrist, four nutritionists, an endocrinologist, diabetician and even a chest physician. The most prudent approach is of course, like Joshi advises, to be certain you need the procedure. "It's not free from complications. It's best to be sure."THE COSTSRs 1.5 - Rs 4 Lakh at Kokilaben Hospital, Andheri Rs 3.5 Lakh (Approx.) at Aastha Health Care Clinic, Mulund Rs 3 Lakh (+ hospital room costs) with Dr Mufazzal Lakdawala Rs 2 - Rs 4 Lakh at Forever Young Cosmetic Clinic, AndheriINDIA AT RISK » 7 crore diabetics (number could cross 11 crore by 2030)