Halloween may be hazardous to kids

It is the adults who should be afraid this Halloween. Not of ghouls and goblins, but of psychologically scarring their children.


In a recent study of 6- and 7-year-olds in the Philadelphia area, Penn State psychologist Cindy Dell Clark found that most parents underestimate just how terrifying the holiday can be for young kids.

Halloween has been scaring the heck out of kids of all ages for centuries.

Two thousand years ago, Celts living in what is now the United Kingdom celebrated their new year at the end of October. During these days of transition from the end of summer harvest to the beginning of winter, spirits were thought to roam among the living.

The modern customs of candy and costume are rooted in medieval England. To avoid being recognized by the visiting spirits, people would dress up in masks whenever they left home. Bowls of food were placed outside to keep the ghosts happy. The practices have morphed into Halloween as it is known today, with parents encouraging their own little ghosts and goblins to haunt the neighborhood.

Unwilling participants? There have been few studies to examine how the holiday affects children. Child psychologists generally caution parents that the fright of some aspects of Halloween can be too much for the very young, and advise adults to keep a close eye on children and remind them of what is real and what is not.

According to Clark, who interviewed parents and children after three Halloweens, younger children may be unwilling participants in the whole ritual.

The key ingredient in the recipe of Halloween fright is, of course, death.

"Intriguingly, Halloween is a holiday when adults assist children in behaviors taboo and out of bounds," Clark writes in the anthropological journal Ethos. "It is striking that on Halloween, death-related themes are intended as entertainment for the very children whom adults routinely protect."

For most kids, at an age when they're often not included in family funerals or witness to grave illnesses, Oct. 31 is often their first introduction to the subjects.

Too tender for tombstones? Halloween also provides an opportunity for adults to confront usually uncomfortable topics like death, Clark told LiveScience.  Kids as young as 6 and 7, however, don't differentiate between real death and the store-bought skeleton figures hanging in the trees and fake tombstones on the grass.
"Children see things on a real plane, as opposed to adults, who are trying to get around real themes like death by treating them as fun," she said.

Conducting her study, Clark observed young children cowering from fear in front of the haunted displays and graveyard scenes common in so many American neighborhoods at Halloween.

Children interpret the frights of Halloween differently depending on their personal situations, such as the recent death of a relative or pet. An especially harrowing Halloween experience might have long-lasting effects. She recalled an interview with a grown woman who described trick-or-treating at age 8: A well-intentioned neighbor invited the girl inside, only to scare her and a friend with a real coffin displayed in the living room. 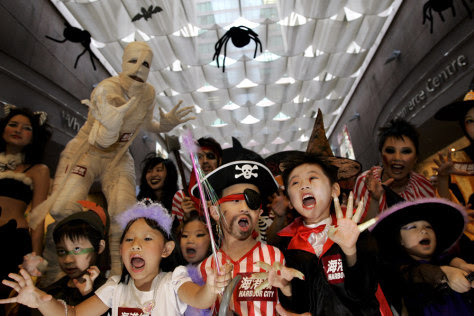 A group of children pose near a pumpkin display as part of the Halloween decorations outside a Hong Kong shopping mall.