WHO: air pollution 'is single 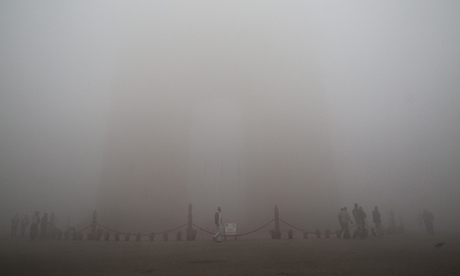 India Gate can barely be seen through smog in Delhi. Around 4.3 million deaths in 2012 were caused by indoor air pollution, mostly from wood and coal stoves in Asia. Photograph: Louis Dowse/Corbis

Air pollution has become the world's single biggest environmental health risk, linked to around 7 million – or nearly one in eight deaths in 2012 –according to the World Health Organisation (WHO).

The new figures are more than double previous estimates and suggest that outdoor pollution from traffic fumes and coal-burning, and indoor pollution from wood and coal stoves, kills more people than smoking, road deaths and diabetes combined.
Around 80% of the 3.7 million deaths from outdoor pollution came as a result of stroke and heart disease, 11% from lung diseases and 6% from cancers. The vast majority were in Asia, with 180,000 in the Americas and Europe combined, said the WHO.
Indoor air pollution led to 4.3 million deaths, of which 34% were caused by strokes, 26% heart diseases and 12% respiratory disease in children. Only 19,000 of these deaths were in rich countries, with the vast majority being in low- and middle-income countries. Because many people are exposed to both indoor and outdoor air pollution, the WHO said deaths attributed to the two sources cannot be added together.
"The risks from air pollution are now far greater than previously thought or understood, particularly for heart disease and strokes," said Maria Neira, director of WHO's department for public health, environmental and social determinants of health. "Few risks have a greater impact on global health today than air pollution; the evidence signals the need for concerted action to clean up the air we all breathe."
South-east Asia, said the WHO, is now the most polluted region in the world, with 3.3 million deaths linked to indoor air pollution and 2.6 million deaths related to outdoor air pollution. This reflects the explosive growth of cities and industrial development in China and India, as well as continuing deep poverty in rural areas.

A woman cooks food in her shanty in Mumbai, India.

Worldwide, one in eight deaths is attributed to pollution—frequently from fuel burned indoors for cooking.

Seven million people die each year because of exposure to air pollution. That's one in eight deaths across the globe, making air pollution the single greatest environmental health risk on Earth. The estimate wasreported this week by the World Health Organization; based on 2012 numbers, it is double the WHO's previous 2008 estimate.

What's more shocking is that the air pollution is often in the victim's own home. More than half of those deaths are caused by indoor pollutants, which in the developing world largely come from indoor cooking stove fuels like wood, coal, and cow dung.
Since the 1970s, Kirk Smith, professor of global environmental health at the University of California at Berkeley, has studied the effects of indoor cooking using solid fuels like wood, coal, and cow dung. He told the WHO, "Having an open fire in your kitchen is like burning 400 cigarettes an hour."
Carlos Dora, coordinator for the WHO Interventions for Healthy Environments unit, prefers to put it more scientifically. "The home with a dirty cookstove using coal can reach 2,000 or 3,000 micrograms per cubic meter of particles," he says. That's 200 to 300 times the WHO's average daily standard for maximum concentration of the fine particles of air pollution—about 25 to 100 times smaller than a human hair—that can settle deeply in the lungs.
Breathing those microscopic dirty particles causes more than lung cancer, which is responsible for only 6 percent of the seven million premature deaths caused by air pollution. The vast majority of deaths—69 percent—are due to heart disease or stroke.

Evidence of the cardiovascular harm from air pollution has increased since the WHO's last report. That's one reason the estimated number of deaths has risen so dramatically. The other reason is that the organization has developed better ways to measure pollution outside of urban areas.
"There are more epidemiological studies showing a clear connection between air pollution and heart disease and stroke. The evidence now is robust," says Dora. "And we have better models of how pollution travels and more monitoring stations in rural areas."
Almost three million people around the world use dirty solid fuels to do their cooking. Women and children, whose days often center around gathering fuel and cooking, are more exposed to pollutants than men. Yet death rates attributed to air pollution are higher, at 49 percent, among men than among women, at 42 percent. Men in general have more risk factors—like smoking or a high-fat diet—than women do, says Dora. "Any one risk factor has a higher impact on people who already have a number of other risk factors."
The report measured the global impact of pollution by region, not individual countries. The western Pacific, Southeast Asian, and African regions accounted for almost six million premature deaths. But there have been fewer than 400,000 premature deaths from air pollution in high-income countries and regions of Europe and the Americas, where laws and regulations have decreased outdoor air pollution, smoking indoors has become culturally unacceptable, and almost no one cooks with coal or cow dung. 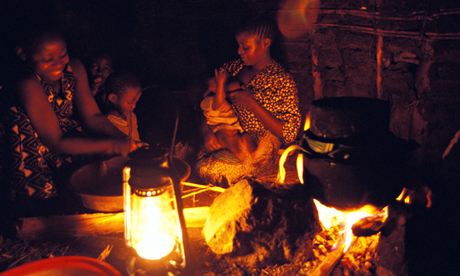 A woman breastfeeds her baby while another prepares food on an open fire indoor in Kagera, Tanzania. Women had higher levels of exposure than men in developing countries. Photograph: Jochem Wijnands/Alamy
The new estimates are based not on an significant increase in pollution, but on improved knowledge of the links between air pollutants and heart diseases and cancers, in addition to known links with respiratory diseases. A 2008 WHO report estimated that outdoor pollution led to about 1.3 million deaths, while about 1.9 million people were killed by indoor pollution. A Lancet study last year suggested that the surge in car use in south and east Asia killed 2.1 million people prematurely in 2010.Last year, WHO's cancer agency classified air pollution as a carcinogen, linking dirty air to lung and bladder cancer.
"Cleaning up the air we breathe prevents non-communicable diseases as well as reduces disease risks among women and vulnerable groups, including children and the elderly," said Dr Flavia Bustreo, WHO assistant director general of family, women and children's health. "Poor women and children pay a heavy price from indoor air pollution since they spend more time at home breathing in smoke and soot from leaky coal and wood cook stoves."
Martin Williams, professor of air quality at the environmental research group, King's College London, said: "This is an important study, and although the majority of attributable deaths occur in south-east Asia and the western Pacific, air pollution impacts on mortality and health are still a significant public health problem in Europe, including the UK."
Air pollution is increasingly linked with ill health and deaths in rich countries as traffic emissions rise. In the US, air pollution causes about 200,000 early deaths a year, with emissions from cars and trucks causing 53,000 and power generation 52,000, according to MIT's environment laboratory. California suffers most from air pollution, with 21,000 early deaths.