After professional dancer Adrianne Haslet-Davis lost part of her left leg in the Boston Marathon bombings last April she resolved to dance again.

She made good on that promise Wednesday by performing the rumba in public using a specially designed prosthetic limb.

"I was always determined to dance again, and I knew that I had to, that I would, and here I am," she told the Boston Herald, after her performance at a TED conference in Vancouver. "I'm a survivor, not a

went off. Doctors had to amputate her leg below the knee.

While in recovery, she met MIT's head Biomechatronics researcher Hugh Herr at a rehab center where he was giving a talk, according to Mashable. Herr's team creates bionic limbs.

"I understood her dream to return to dance," Herr told Mashable. Herr related because he lost both of his legs at age 17 from a climbing accident. He designed his own prosthetic limbs that allowed him to return to mountain climbing. He agreed to help Haslet-Davis dance again.

To do that, he and his team studied dancers of similar size to Haslet-Davis and eventually created a limb that was able to respond and behave in a natural way. "In 3.5 seconds, the criminals and cowards took Adrianne off the dance floor," he said at the TED Talk. "In 200 days, we put her back."

"Conquering that out on that stage felt like accomplishing something I have been waiting my entire life to accomplish," Haslet-Davis told the Boston Herald. "It took me a long time to even listen to music after the marathon. To dance again is incredible." 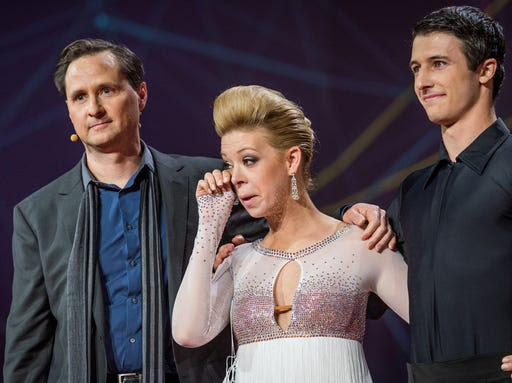 Adrianne Haslet-Davis wipes away a tear while standing on stage with MIT professor Hugh Herr, left, and dancer Christian Lightner on March 19 at the 2014 TED Conference.(Photo: James Duncan Davidson, AP) 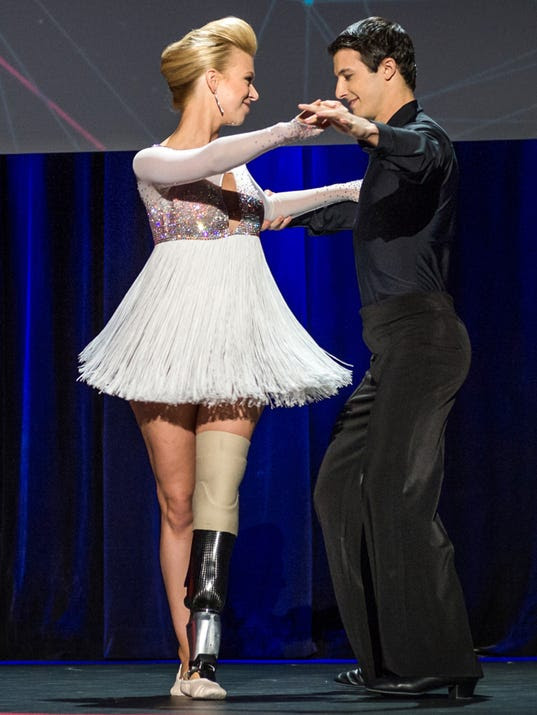