The amount of monsoons in India depends on the dust in North Africa, says a new study from the Indian Institute of Technology Bhubaneswar.

The dust in the air absorbs sunlight west of India, warming the air and strengthening the winds carrying moisture eastward. This results in more monsoon rainfall about a week later in India,'' said the study which appeared in Nature Geoscience on Sunday.

The study, done in collaboration with the US-based Pacific Northwest National Laboratory, explains how dust can affect the climate.
The study also shows that natural airborne particles can influence rainfall in unexpected ways, with changes in one location rapidly affecting weather thousands of miles away,'' said a release put out by the Pacific Northwest National Laboratory. The researchers analyzed satellite data and performed computer modeling of the region to tease out the role of dust on the Indian monsoon.
""The difference between a monsoon flood year or a dry year is about 10 % of the average summer rainfall in central India. Variations driven by dust may be strong enough to explain some of that year-to-year variation,"" said climate scientist Phil Rasch of the American department of energy's Pacific Northwest National Laboratory.
Rasch, V Vinoj of the Indian Institute of Technology Bhubaneswar, India, and their coauthors wanted to explore a correlation that appeared in satellite records: higher amounts of small particles called aerosols over North Africa, West Asia, and the Arabian Sea seemed to be connected to stronger rainfall over India around the same time.

: A team of Massachusetts Institute of Technology is planning to turn plants into eco-soldiers. Plants already help control levels of carbon dioxide in the atmosphere. Now, MIT researchers plan to embed carbon nanotubes in the plant's chloroplast (where photosynthesis takes place) to produce energy that can be used to monitor environmental pollutants.
In a new Nature Materials paper, the researchers report increasing plants' ability to capture light energy by 30 % by embedding the carbon nanotubes in the chloroplast. Using another type of carbon nanotube, they also modified plants to detect the gas nitric oxide,'' said a press release put out by MIT.
Together, these represent the first steps in launching a scientific field the researchers have dubbed as ""plant nanobionics.""
""Plants are very attractive as a technology platform,"" says Michael Strano, leader of the MIT research team. ""They repair themselves, they're environmentally stable outside, they survive in harsh environments, and they provide their own power source and water distribution.""
His team thinks plants can be turned into self-powered, photonic devices such as detectors for explosives or chemical weapons. They also plan to enhance the photosynthetic function of chloroplasts isolated from plants, for possible use in solar cells.
By adapting the sensors to different targets, the researchers hope to develop plants that could be used to monitor environmental pollution, pesticides, fungal infections, or exposure to bacterial toxins.

A tequila shot or two can bring alive even a dying party. And it now seems that it can also do wonders for your blood sugar.

A sweetener created from the plant used to make tequila has been found to be highly effective in lowering blood glucose levels in those who have type 2 diabetes and also help them and the obese lose weight.

The secret is in what is called agavins, a natural form of sugar found in the agave plant which are non-digestible and can act as a dietary fibre, so they would not raise blood glucose.

Scientists fed a group of mice a standard diet and added agavins to their daily water.
They weighed the mice daily and checked their glucose blood levels weekly.
Most mice that drank agavins ate less, lost weight and their blood glucose levels decreased when compared to other sweeteners such glucose, fructose, sucrose, agave syrup and aspartame.
"We have found that since agavins reduce glucose levels and increase GLP-1, they also increase the amount of insulin," said researcher Mercedes G Lopez.
GLP-1 (glucagon-like peptide-1) is a hormone that slows the stomach from emptying, thereby stimulating production of insulin.
She added "Agavins are not expensive and they have no known side effects, except for those few people who cannot tolerate them".
In addition, agavins, like other fructans, which are made of the sugar fructose, are the best sugars to help support growth of healthful microbes in the mouth and intestines, she said.
Lopez, who is a biochemist in Mexico also noted that agavins can help people feel fuller, which could help them eat less.

The researchers said since agavins contain fructoses, are they like high-fructose corn syrup, a processed sweetener?
Lopez pointed out that, indeed, high-fructose corn syrup is loaded with fructose sugars and, therefore, can raise blood sugar levels.
But agavins are fructans, which are fructoses linked together in long, branched chains. The human body can't use them in that configuration, so they don't affect blood sugar.
Agavins also sometimes get confused with agave nectar or agave syrup, which appears on many health-food store shelves. These products contain fructans that have been broken down into individual fructoses, so they are much more similar to high-fructose corn syrup.
Also, she and her team said agavins are better than artificial sweeteners, which are absorbed by the body and can cause side effects, like headaches.
"One slight downside, however, is that agavins are not quite as sweet as their artificial counterparts," she said.
Of course, the agave's claim to fame is as the plant from which tequila is made. Lopez explained that agavins are the only carbohydrates used to produce the drink. All ethanol in tequila comes from the fermentation of glucose and fructose generated after agave pines are cooked. But because the agavins are converted to ethanol, agavins are not found in the finished product. body’s use of insulin.

However the nutrients are often destroyed in the processing of making chocolate.

The study of 18,000 people will be sponsored by the National Heart, Lung and Blood Institute and Mars.

The company, which makes M&amp;Ms and Snickers, has patented a way to extract flavanols from cocoa in high concentration and put them in

Mars and other firms already sell cocoa extract pills, but with less active ingredients than those that will be tested in the study.

JoAnn Manson, preventive medicine chief at Brigham and Women’s Hospital in Boston, said the study would try to establish whether there

were health benefits from chocolate’s ingredients – without the sugar and fat.

You’re not going to get these protective flavanols in most of the candy on the market,’ said Dr Manson. ‘Cocoa flavanols

are often destroyed by processing.’

Participants will get dummy pills or two capsules a day of cocoa flavanols for four years, and neither they nor the study

leaders will know who is taking what during the study. The flavanol capsules are coated and have no taste, said Dr

Manson, who has tried them herself.

In another part of the study, participants will be given dummy pills or multivitamins containing a broad range of nutrients.

They were then given brain scans while being asked to perform tasks to stimulate mental activity.

work by dilating the blood vessels.

Dr Macdonald said: ‘This raises the possibility that certain food components like cocoa flavanols may be beneficial in

be cognitively impaired, such as fatigue.’ 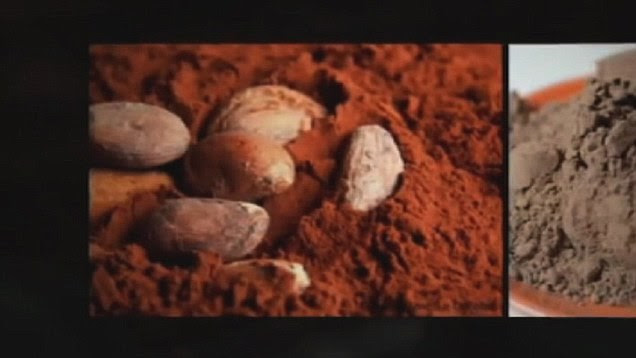