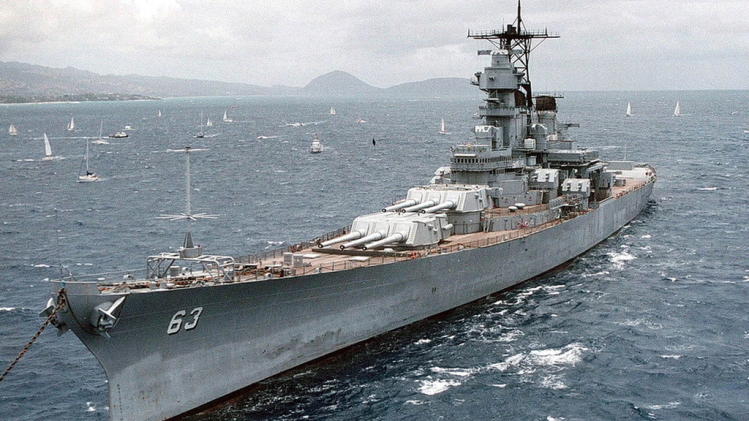 Washington (AFP) - The US Navy believes it has finally worked out the solution to a problem that has intrigued scientists for decades: how to take seawater and use it as fuel.

The development of a liquid hydrocarbon fuel is being hailed as "a game-changer" because it would signficantly shorten the supply chain, a weak link that makes any force easier to attack.

The US has a fleet of 15 military oil tankers, and only aircraft carriers and some submarines are equipped with nuclear propulsion.
All other vessels must frequently abandon their mission for a few hours to navigate in parallel with the tanker, a delicate operation, especially in bad weather.
The ultimate goal is to eventually get away from the dependence on oil altogether, which would also mean the navy is no longer hostage to potential shortages of oil or fluctuations in its cost.
"We are in very challenging times where we really do have to think in pretty innovative ways to look at how we create energy, how we value energy and how we consume it.
"We need to challenge the results of the assumptions that are the result of the last six decades of constant access to cheap, unlimited amounts of fuel," added Cullom.
"Basically, we've treated energy like air, something that's always there and that we don't worry about too much. But the reality is that we do have to worry about it."

US experts have found out how to extract carbon dioxide and hydrogen gas from seawater.
Then, using a catalytic converter, they transformed them into a fuel by a gas-to-liquids process. They hope the fuel will not only be able to power ships, but also planes.

That means instead of relying on tankers, ships will

be able to produce fuel at sea.

The predicted cost of jet fuel using the technology is in the range of three to six dollars per gallon, say experts at the US Naval Research Laboratory, who have already flown a model airplane with fuel produced from seawater.
Dr Heather Willauer, an research chemist who has spent nearly a decade on the project, can hardly hide her enthusiasm.
"For the first time we've been able to develop a technology to get CO2 and hydrogen from seawater simultaneously, that's a big breakthrough," she said, adding that the fuel "doesn't look or smell very different."

Now that they have demonstrated it can work, the next step is to produce it in industrial quantities. But before that, in partnership with several universities, the experts want to improve the amount of CO2 and hydrogen they can capture.
"We've demonstrated the feasibility, we want to improve the process efficiency," explained Willauer.
Collum is just as excited.
"For us in the military, in the Navy, we have some pretty unusual and different kinds of challenges," he said.
"We don't necessarily go to a gas station to get our fuel, our gas station comes to us in terms of an oiler, a replenishment ship.
"Developing a game-changing technology like this, seawater to fuel, really is something that reinvents a lot of the way we can do business when you think about logistics, readiness."
A crucial benefit, says Collum, is that the fuel can be used in the same engines already fitted in ships and aircraft.
"If you don't want to re-engineer every ship, every type of engine, every aircraft, that's why we need what we call drop-in replacement fuels that look, smell and essentially are the same as any kind of petroleum-based fuels."
Drawbacks? Only one,it seems: researchers warn it will be at least a decade before US ships are able to produce their own fuel on board. 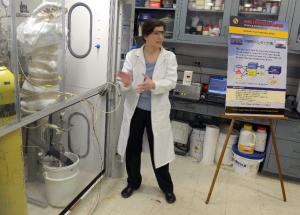 Dr. Heather Willauer explains how scientists at the Naval Research Laboratory in Washington, DC can  … 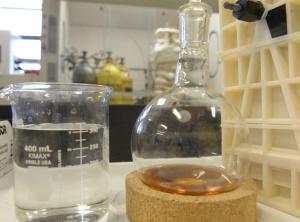 This April 2, 2014 US Navy handout image shows a beaker of fuel(right) made from seawater by scienti … 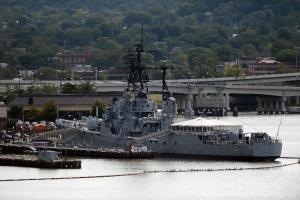 A general view of a US Navy ship at the Washington Naval Yard on September 17, 2013 in Washington, D …